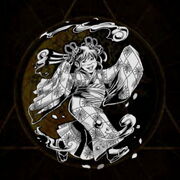 "I am the friendly house spirit. Open your doors to me and I will assure riches come to you and your family."

Zashiki (the formal reception room for guests in a Japanese house) warashi (child) are house spirits, loved by all, and believed to bring great fortune and riches to those whose houses it haunts.

They appear as ghost-like five or six year old children with blushing red faces. They can be boys or girls, and usually wear tradition clothes. Direct sightings of these ghosts are rare. In some instances it is said that only the house's owners, or only children, are able to see these spirits. They befriend the children of the house. They keep elderly or infertile couples company, and these couples often treat the Zashiki-warashi as if it were their own child.

Zashiki-warashi are considered guardian spirits of the house, and gods of luck. It is said that a house with a Zashiki-warashi will prosper and grow rich, and a house that drives away such a spirit will fall into decline and ruin.