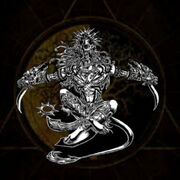 "I am the messenger to the underworld. Through my undying might, one can open their world to the other side."

Zarabanda is one of primary gods of the native Congo religion.

It is through the spirit Zarabanda that mankind can communicate directly to the spirit world.

Zarabanda is also called the devourer of evil and an unconquerable force of power that can break any curse, lift any hex, and exorcise any evil spirit.