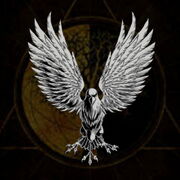 "I am the three legged crow. I inhabit the sun and form a dark shadow seen from the earth when I spread my wings."

Yatagarasu ("eight-span crow") and its appearance is construed as evidence of the will of Heaven or divine intervention in human affairs. The crow is a mark of rebirth and rejuvenation; the animal that has historically cleaned up after great battles symbolized the renaissance after such tragedy.

In Japan, the crow has also been a symbol of the sun since ancient times, appearing in Japan’s earliest written works. It is a holy creature and a servant of the sun goddess, Amaterasu. The name Yatagarasu means “eight span crow.” One “span” — roughly 18 centimeters — just a poetic way to say “very large.”

The three legs of the bird represent heaven, the earth, and humanity, while the crow itself represents the sun. This symbolizes that heaven, earth, and mankind all come from the same sun, and are like brothers to each other.