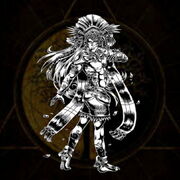 "I adore your mortality and find happiness in your creative soul. Join me amongst the flowers to dance, to follow the sun, and in all that is beautiful."

Xōchipilli is the god of art, games, beauty, dance, flowers, and song.

His name contains the Nahuatl words xōchitl ("flower") and pilli (either "prince" or "child"), and hence means "flower prince".

He, among other gods, is depicted wearing a talisman known as an oyohualli, which was a teardrop-shaped pendant crafted out of mother-of-pearl.

As one of the gods responsible for fertility and agricultural produce, he is also associated with Tlāloc (god of rain).

Xōchipilli has also been interpreted as the patron of both homosexuals and male prostitutes, a role possibly resulting from his being absorbed from the Toltec civilization.