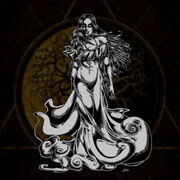 "Mournfully, and but for the occasional wail, I quietly haunt this place. I'm attached to the building, to the grounds, but cannot always tell you why. Please, do not pursue me. Your life causes me distress."

Spirit derives from almost every country in the world, most prominent in parts of the United States, Ireland and Great Britain.

The White Lady is a very common type of female ghost usually connected to a local legend. The legend usually involves some sort of tragedy, often murder, loss of a child, husband or parent and a sense of purity before death although occasionally suicide.

The ghost is often clad in a flowing white dress and her skin, eyes, and often hair are usually all chalky white. Generally the details of each specific White Lady story or legend are vague and difficult to actually confirm with fact.

The White Lady is often a young woman who died before her time, or a woman who was murdered and seeks vengeance. Whatever her reason may be, the result is the same— she walks the earth long after her death, searching for her children, her murderer, or anything else she needs before she can move on to the afterlife.