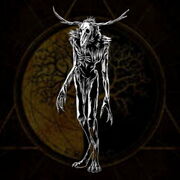 "My kingdom is the forests of the high north. Disturb me if you dare; blood and fear and desperation will undoubtedly follow."

Spirit derives from the folklore of the First Nations Algonquian tribes (United States and Canada).

The Wendigo is described as a monster with some human characteristics or a spirit who has possessed a human and made them a monster. *

Its name comes from the controversial modern medical term Wendigo psychosis, a culture-bound syndrome with symptoms such as an intense craving for human flesh and fear of becoming a cannibal. *