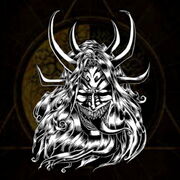 "Standing with my back to you, you cannot see my lunatic grin. As you near, my body slips into the earth until only my head remains, which I will then turn to you so that I can witness your terror. Run, if you will, I am quicker than you think."

The cabeça errante (wandering head), also known as the cabeça Satânica (Satanic head), is a disembodied demon head that bounces or rolls along the ground, displaying a grin of evil incarnate.

Most often, he shows up as a long-haired stranger always late at night, in places where there is little light, his back to the victim. The stranger’s body then melts into the ground, stopping at the neck, and only a shaggy head remains to be seen.

Smiling like a lunatic, the head turns to face its prey, it starts chasing wanderers who insist on being out of the house at late hours. Just a single touch is all it takes to render you swiftly sick and then dead.

It is therefore a sign of ill omen, when the Wandering Head goes out, and suddenly stops in front of someone's home. A cross made of Palm Sunday straw, glued to the outside of the doors, is the certainty that it will not stop in front of that house.