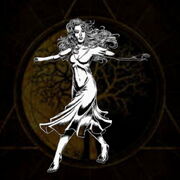 "Comely and seductive in my native wilds I whisper and the winds obey. Do not misjudge me, the earth trembles when I bring war."

Vila (Vile - plural) is a cloud nymph that has a similar in appearance to the European tales of fairies. She is a lost woman who died unbaptized or the betrothed woman whose lives ended before marriage. She was not born as a spirit of nature but rather become a Vila with death, gaining power over the winds. She can appear as a whirlwind.

Vile are usually friendly to people, but they can take horrible revenge on those who insult them or disregard their orders. Vile are said to occasionally become fierce beings known equally for forcing companionship and seeking vengeance.

They are also known to participate in battles not unlike those of the Valkyries from Norse mythology. Their voices are a force to be reckoned with—so powerful that a few notes can summon the most dangerous winds and storms to wipe out their enemies, causing the earth to shake from the very force of their magic.

Only sometimes do they choose to help or heal humans, in war or in moments of compassion, but if the Vila are angered, it is not uncommon for them to kill the humans without a second thought.