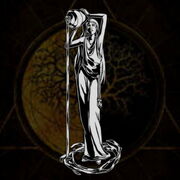 "Once the attendant of the sea god Poseidon I shift my form from water to flesh with ease. Secrets I have, and secrets I'll share if you'll join me beneath the shimmering surface."

The Undine is a water spirit (or nymph) that usually appears as a beautiful woman. Unsuspecting men follow the undine's beautiful voice to where she dwells, whether that be a waterfall, river, or lake.

Though she shares this trait with the sirens of Greek mythology, the undine does not drown her victims. Rather, the undine herself appears to be designed to play the role of the victim.

Unlike humans, she is soulless. But the Undine can get a soul by marrying a human and bearing him a child. However, if she does this, she loses her otherworldliness. A soul is what separates the human life from the elemental life.

The undine, or undine-like creatures, are found in Greek, Irish, Scottish, Russian, Norse, and German stories.