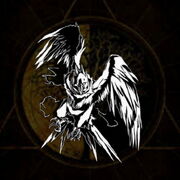 "You hear the thunder of my wings, and see the lightning that I command. I am often carved in my admirer's totems."

It's especially important, and often depicted, in the arts, songs, and oral histories of many Pacific Northwest Coast cultures (and has reached across the continent).

The Thunderbird controls the upper world while the underworld is controlled by the Great Horned Serpent or the underwater panther.

One tradition states that a man who has a vision of a thunderbird during a vision quest will become a war chief.