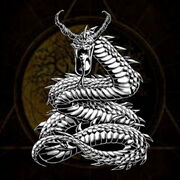 "I am the Fourth of the Seven. I am the Terrible Shibbu, a deadly snake which silthers quietly. Nobody will hear the snap of my fangs until it's too late."

This serpent or "Shibbu" demon may appear in many forms, but usually it assumes the shape of a horned serpent.

A motif (design) of a snake with a pair of horns is often found on the Kassite stones called "kudurrus", on Assyrian seals and statues.

The Terrible Shibbu appears as a shadowy, ghastly spectre, spitting out deadly venom.