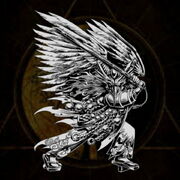 "I am Tengu, the master of martial arts. I am a shape-shifter, and can transform into any human or animal I choose."

Spirit derives from Japanese mythology , before the middle of the 3rd century BC.

Tengu are considered a type of yōkai or Shinto kami (gods) and they get their name from a dog-like Chinese demon named Tiangou so they are a balance of dangerous and protective of mountains and forests.

During the 14th century, the Tengu began to trouble the world outside of the Buddhist clergy, and like their ominous ancestors Tiangou, the Tengu became creatures associated with war.