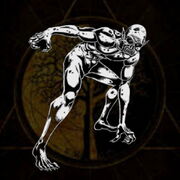 "I can turn myself into any breathing creature, or dismiss myself from the human eye. I can take what I want with ease, and not a witch can stop me."

Strigoi are troubled spirits that are said to have risen from the grave. They are attributed with the abilities to transform into an animal, become invisible, and to gain vitality from the blood of their victims.

The Italian word strega or the Venetian word strìga which mean "witch" are found throughout the Romance languages. In French, stryge means a bird-woman who sucks the blood of children.

In the late Roman period the word became associated with witches or a type of ill-omened nocturnal flying creature. A strix, related particularly to owls, referred to night-time entities that craved human flesh and blood, particularly infants'.

Bram Stoker's Dracula has become the modern interpretation of the Strigoi through their historic links with vampirism.