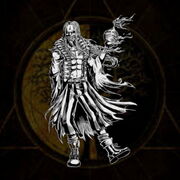 "I am the lonesome traveller, banned from both Heaven and Hell. With only a hallowed turnip to light my way, I wonder the world for the rest of eternity. Stumble upon me and I will share with you the stories of my time."

Jack was known throughout the land as a deceiver, manipulator and otherwise drunk dreg of society. The legend is incredibly lengthy and detailed.

Satan hears about how horrible Jack is, he wanted to meet Jack. After tricking Satan several times (to try to keep his soul), Jack is denied entry into Heaven, when he died, because of Jack's horrible behavior.

Jack went to Hell for entry, but Satan wouldn't allow him either. Instead Satan gave Jack a piece of burning ember to light his way of the darkness. That's how Jack O' Lantern came into a tradition.