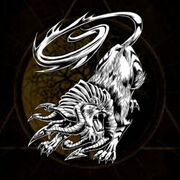 "I am often depicted as a man with a lion's head. I hold my butcher knife close, ready to strike at anyone who threatens me."

Shezmu was a complex god: He was very malicious and bloodthirsty - "god of blood" & "he who dismembers bodies". And he was a celebration deity - "lord of perfume" & "lord of wine".

He was known as the 'Executioner of Osiris'. He followed the commands of The God of the Dead (Anubis, then Osiris) which earned him the title 'Slaughterer of Souls'.

His Norse equivalent is Aegir.