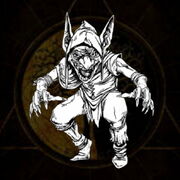 "I dwell in the ruins of tyranny. With sharpened teeth, ghoulish nails, and by bludgeoning, I murder alongside the dark memories of wicked deeds. Beware. My cap must soak in the blood that spills from your veins."

Redcap is a type of malevolent murderous goblin found in borders of England and Scotland: the area was often disputed and as a result many souls were lost in the bloody battle between the two nations, the Redcap was said to either take advantage of this conflict or be born from it.

They are said to inhabit ruined castles found along the border between England and Scotland. Redcaps are said to murder travellers who stray into their homes and dye their hats with their victims' blood (from which they get their name).

Redcaps must kill regularly, for if the blood staining their hats dries out, they die. Redcaps are very fast in spite of the heavy iron pikes they wield and the iron-shod boots they wear. Outrunning a redcap is supposedly impossible.