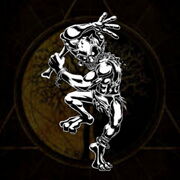 "Good luck becomes the norm if you associate with me, but you'll have to be able to withstand a bit o me mirth first."

The tale has its origins in Detroit, Michigan, in the United States. The Red Man, or Le Nain Rouge, (also called the Demon of the Strait,) is a vicious sprite that has haunted the old city of since at least the 1700s.

It is believed by some that the Red Dwarf originated in Normandy, France. It’s a child size creature wearing a cap and red or black fur boots, covered in thick black hair, it’s teeth rotting away in it’s head and it’s eyes blazing with supernatural fire.

Whatever it’s origins, since it’s arrival in Detroit, it has been the city’s herald of doom. It’s appearance has always foretold some form of ill luck.