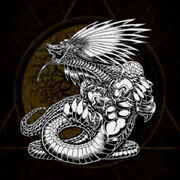 "I am the winged serpent and giver of life. My affection for you is boundless."

Quetzalcoatl was, as his name indicates, a feathered serpent, a flying reptile (much like a dragon), who was a boundary-maker (and transgressor) between earth and sky. He was a creator deity having contributed essentially to the creation of Mankind.

He also had anthropomorphic forms, for example in his aspects as Ehecatl the wind god.

The earliest known documentation of the worship of a Feathered Serpent occurs in Teotihuacan in the first century BC or first century AD.