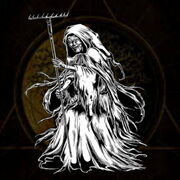 "I am the great disease. I am the silent killer. I am the manifestation of the Black Death itself."

Pesta is a witch that was created after the Black Death hit the Scandinavian countries.

The broom/rake would symbolize the number of deaths in the villages she visited. The rake meant some people would live and the broom meant no one would live.