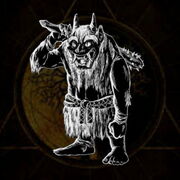 "Reborn with tusk, horn, and the desire to further brutalize mankind after living a truly wicked human life, my pleasure is to punish your existence."

Oni, meaning "to hide or conceal", are a kind of Yōkai that were originally invisible spirits or gods which caused unpleasant things.

Oni are born when truly wicked humans die and end up in one of the numerous Buddhist hells then transformed into Oni.

Occasionally, a human can be so profoundly wicked that his soul is unable to reach redemption, he can transform into an Oni during life and just remains on Earth to terrorize the living.