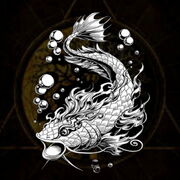 "As I swim in the mud beneath the Islands, the earth may shake and thrash about. I mean not to cause harm; my sheer might is difficult to suppress."

Ōnamazu, "giant catfish", is an yōkai that causes earthquakes if his guard Kashima (god of thunder and a sword god) fails to restrain him.

In 1855, following an earthquake (one of Ansel Great Quakes) near Edo ( modern day Tokyo), Ōnamazu became worshipped as a yonaoshi daimyojin (god of world rectification).