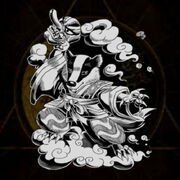 "I am the badger who enjoys a little bit of fun. Please don't be afraid, for I mean you no harm. I strive only to trick and play."

Mujina is an avid shapeshifter and deceiver of humans. One of the forms the mujina is purported to take, is that of a "faceless ghost".

Mujina are small furry badgers and are terrifying by nature but not actually malicious or violent at all. They'll play tricks on anyone, but they particularly enjoy tormenting wicked people and making them look like fools.

They are frequently confused with Tanuki because of their similar size, appearance, and magical prowess.

They are very shy and do not normally like to be seen by or interact with humans. The few mujina which do live among human society take great care not to betray their disguise in any way, unlike other animals which are often much more careless.