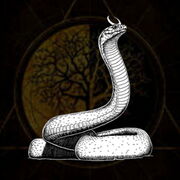 "I am the dream bringer, for I am poured from the white breast of the mother moon. I am fond of witches and will serve at your leisure."

The ouroboros (ancient symbol depicting a serpent eating its own tail) is often interpreted as a symbol for eternal cyclic renewal or a cycle of life, death and rebirth.

Fun Fact: there is a real snake that is also known as a moon snake.

Familiars will protect its summoner and attack along with them.

Moon Snake will assist its summoner by help heal.