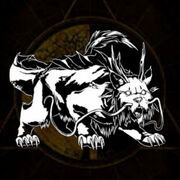 "I rule the creatures of water both shallow and deep. At my command the waves tower, and the wind will thrash the land. I'm unlikely to suffer your presence."

Mishipeshu, an underwater panther, translates into "The Great Lynx" and calls Michipictoen Island in Lake Superior his home.

To the peoples of the Northeastern Woodlands, Great Lakes region, and the Anishinaabe, the Mishipeshu is the most important and most powerful water beings.