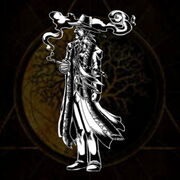 "A glass filled with spirits, and a cigar in and is the proper way to gain my attention. Tell me your desires for I'm friends with the Saints."

Maximón also called San Simón, is a Mayan deity and folk saint represented in various forms. His appearance varies greatly by location: popularly depicted as a man in a suit and hat, or he wears colorful garlands and scarves, or he wears sunglasses and a bandanna.

The worship of Maximón is believed to have begun at the time of the Spanish conquest of the Maya. The designation of Maximón as a Saint is the result of merging religions.

Venerated in form of an effigy which has special attendants that stay by the altar year-round, drinking and smoking alongside it. They deliver offerings from the public to the image. Popular offerings include money, tobacco, and moonshine.