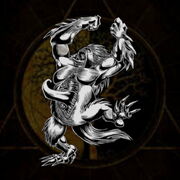 "Wretched are the cursed, for they shall inherit misery. The gods themselves have seen to mine."

Mapinguari is a cryptid reported from the Brazilian Amazon. It is described variably as a red-haired, slope-backed ape-like (classified as giant hominid) creature, long-clawed back feet with a mouth in its abdomen and said to be bulletproof and extremely foul-smelling.

As of 2001, an ornithologist had collected more than eighty Mapinguari sightings - seven accounts of Mapinguaries being killed.

Mapinguari did not appear in folklore prior to the 20th century, but similar cryptids had been reported for centuries prior. It was not initially a very famous cryptid, but has recently become fairly well-known due to media appearance as the "Brazilian Bigfoot".