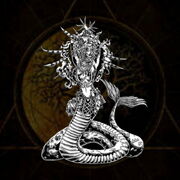 "Sailors of Africa recognize me as a wonderous water deity. I protect the vast rivers and oceans of the land, deeming it safe for all."

Mami Waters is a water spirit venerated in West, Central, and Southern Africa.

She's often described as a mermaid-like figure, with a woman's upper body (often nude), the hindquarters of a serpent, and often carries expensive baubles such as combs, mirrors, and watches.

Another prominent aspect of the Mami Waters deities is their connection to healing. If someone comes down with an incurable, languorous illness, Mami Waters often takes the blame.