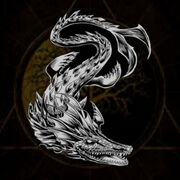 "Some say I'm a relic of the mosasaur, some say I'm just a giant crocodile. I don't like boats or rafts in my waters, and will devour them with no hesitation. You have been warned."

Mahamba, or simply giant crocodile, is a cryptid rumoured to lurk in the Democratic Republic of the Congo's Lake Likouala around the swamp region.

Some have speculated that it is a freshwater relic of the mosasaurs — huge, sea-dwelling lizards which were presumed extinct by the end of the Cretaceous period.

The Bobangi aboriginals have proclaimed this animal to be unlike any other they have seen and it is also been reported to attack and devour rafts and canoes.