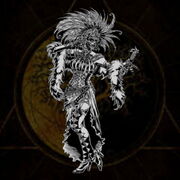 "I am the goddess of life, death, and everything in between. I am depicted with fire and snakes, and represent the various saints of such."

Madame Brigette is a queen of cemeteries and spirit world. She is venerated and petitioned alongside her husband, especially for fertility and healing and invoked on behalf of terminally ill children.

Unlike the other Voodoo loa—spirits who work as intermediaries between mortals and the divine—Madame Brigitte doesn't have her origins in Africa.

Instead, she is believed to have come from Ireland in the form of the Celtic goddess Brigid and is the only loa who is portrayed as being white (Caucasian).