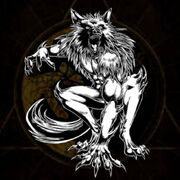 "I am the shapeshifter. The savage wolf is hidden within my human form, until I loose the Beast."

Werewolves have a similar all-over description, but it has countless names and origin stories from all over the world.

Lobisomem is the Portuguese word for werewolf.

In Portuguese and Brazilian, it is the seventh of the sons in a family who becomes the cursed Lobisomem. This belief was widespread into Northern Argentina (called Lobizon), that the seventh sons were abandoned, given up by adoption or killed.

More info on the werewolves.