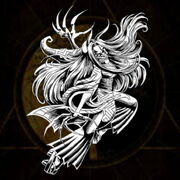 "Don't wonder into my mountains and caves. I will devour anything and anyone who sets foot in my territory."

Kijo are female demons. They resemble human women in most ways, although they are usually hideously ugly to behold. Most kijo were once human women, but hatred, or jealously, a curse, or a wicked crime corrupted their souls their bodies into monstrous forms.

These transformed women retreat from common society into more secluded places like remote mountain caves, abandoned houses, or along mountain roads. Kijo are stronger than most humans, though their strength pales in comparison to Oni. Kijo excel in magic.

Kijo is a term for any female demon, just as the term Oni can technically refer to any male demon. Indeed, the name kijo is formed simply by combining the two kanji for “oni” and “woman.”