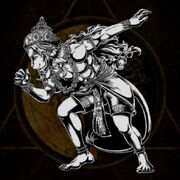 "I am a brave vanara once regarded as a chief. I am noted as the slayer of Shambasadana and will continue to challenge wicked monsters alike."

Kesari is a powerful vānara (forest dweller created by Brahma to help Rama in battle against Ravana) and a chief of the an army.

Kesari is described as a human being with some monkey-like characteristics such as their leaping, hair, fur and a tail.

He is well-known for being the father of the Hindu god Hanuman.