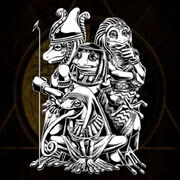 "I am not the frog you may be thinking of. I am the Egyptian representation of night and day. If you come here to converse about my representation in this new world, keep walking."

Kek was one of the eight primordial elements in the Ogdoad creation myth. He represented darkness in combination with his female aspect Keket (the female form of his name). As with the other three male elements, Kek was depicted as a frog, or as a frog-headed man.

Kek represented darkness, obscurity and night. This darkness was the chaotic darkness which existed before the creation of the world. However, although he was a god of the darkness, he was also associated with the dawn and given the epithet, the “bringer-in of the light”.

It is thought that Kek helped with creation, then died and retired to the land of the dead where they continued to make the Nile flow and the sun rise every day.