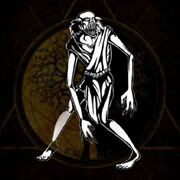 "I will smile when I am fat with the flesh and blood of all the dead."

Jikininki "human-eating ghosts" are also called wendigo, are ghouls which feasts on the corpses of the dead.

They appear as ordinary humans but they exist between the living and the dead. The Jikininki and their dwellings are invisible during the day and only appear during the night.

A Jikininki is born when a person performs evil deeds, corrupting their soul. Some of them were corrupted priests who couldn't properly pass on after their death.