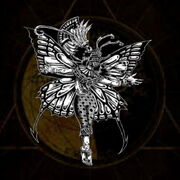 "I am the Obsidian Butterfly, made of the bones of Mictlan and ruler of the realm of Tamoanchan."

Itzpapalotl is the goddess of rejuvenation and purification by sacrifices.

She's often depicted as a skeletal being with jaguar claws and wings edged by obsidian knifes.

She is one of the Tzitzimime, the powerful and dangerous star demons. With 5 other female deities, including Tzitzimitl, the Tzitzimime are protectors of midwives and women in labor.