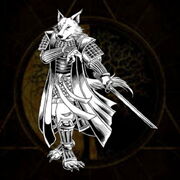 "Be careful not to mistake me from an ordinary canine. The level of loyalty I provide depends on the jingle of change in your pocket."

Inugami ("dog god/spirit") is a spiritual possession by the spirit of a dog. Widely known throughout western Japan, it is theorized that Shikoku, where no Kitsune could be found, is the main base of the inugami.

Like the real dog, Inugami is a breed created and maintained entirely for the use of humans. And like more natural strains of hound crafted for violent purposes, the inugami can be a dangerous investment for its owner, haunting and terrorizing the human who sought to turn it on others.