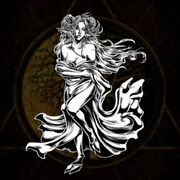 "Don't confuse me with Fuath. I am beautiful yet also monstrous, the Green Lady with the lower end of a goat."

She's a ghost also known as Green Maiden, and may appear as a woman of beauty or monstrous half-woman and half-goat similar to a faun or satyr with her lower goat half is disguised by a long green dress or robe.

She was once a mortal noble woman, to whom a "fairy" nature had been given, or who was cursed with the goat legs and immortality.