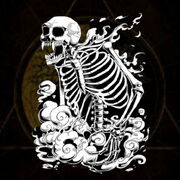 "I am the starving skeleton. Wander into my sight and I will feed on your blood."

Spirit derives me from Japanese mythology.

These yōkai are 15 times taller than an average person, created from the amassed bones of people who died of starvation.

Gashadokuro possess the powers of invisibility and indestructibility.