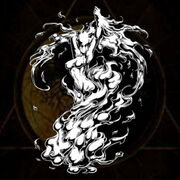 "Regarded as the Lithuanian spirit of fire, I am the protector of home and family. I take many forms most commonly a cat, stork, or rooster."

Goddess of fire and ashes, Gabija is the protector of home and family.

With her zoomorphic powers, she's able to transform into forms of a cat, stork, or rooster, or she could just appear as a woman in red clothing.

If angered, she would burn the house, and much folklore describes the ill fate of those who offended her by stomping, spitting, or urinating on her (as the fire).