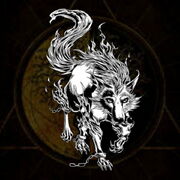 "I am the Fifth of the Seven. I am the Furious Wolf, who knoweth not flee. Challenge me, and see who is the last to make a sound."

Furious Wolf appears as a huge wolf or an anthropomorphic werewolf, with sharp teeth and hard claws.

Like Grim Leopard, Its drive of primal animal impulse, violently killing, greedy devouring the flesh of a victim — as driven by primal urge to satisfy the hunger — may result in cannibalism.