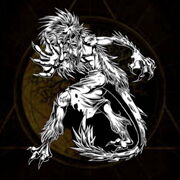 "My name means - hate - in Scottish Gaelic. Assume my personality the same."

Fuath is a class of malevolent water spirit that inhabit the sea, rivers, lakes, and sea lochs of Scotland and Ireland.

With the shape-shifting ability, they often trick their victims into humanoid creatures and even angels of light.

They have very keen eyes and will pull unsuspecting swimmers underwater to their deaths.