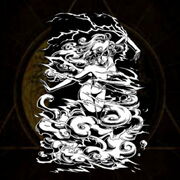 "I am the Last of the Seven. I am the Storm, the Evil Wind, and I take my vengeance."

Spirit derives from derives from ancient Babylon, Mesopotamia (from the beginning of written history circa 3100 BC).

This spirit reveals a close connection with violent forces of nature: storms, hurricanes, tornadoes, heavy rains, thunders and lightning — with all fierce phenomena which belong to the sphere of air.

It may appear to the summoner In a form of a black winged figure, or as an airy serpent with a human-like head and horns.

On the astral level the demon might be used for offensive attacks. It raises storms on the astral plane and causes severe damage to the enemy.

It may also be used to force a change through the astral level which will manifest in the mundane life.

Yet, it is a violent demon, and should be approached carefully.