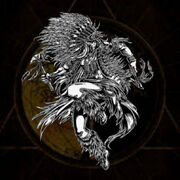 "I am an ancestral guardian of brave adventurers. If you bore me, witch, I will find another."

El Indio (“The Indian”) is an ancestral guardian spirit. Although there are archetypal Indio spirits, this is a class of spirits: each witch, devotee, or spiritualist may have their own unique Indio who serves as spiritual advisor and/or guardian.

Although this class of spirit is very popular in the Spanish Caribbean and is perceived as an ancestor, the image does not portray a native Caribbean or Mexican. Instead, images generally depict an idealized North American Plains Indian dressed in buckskin and frequently wearing a feathered war bonnet.

El Indio de la Paz, or the Indian of Peace, serves as a sentinel and guardian. He is commercially portrayed as a man sitting cross-legged, smoking the sacred pipe.