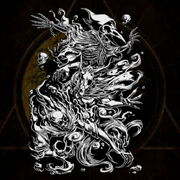 "We served the vanguard of the Ember Wars. Now, the sweet blood of witches cries to us once more."

The Edimmu were a vengeful type of evil jinn with a vampiric tendency (sucked the life out of the vulnerable and the sleeping (most commonly the young).

It was believed that a person could become an Edimmu by a violent death (murder, drowning, etc.), leaving a corpse mutilated or unburied, if proper funeral rites were not observed, or if there was nobody who cared for the soul.