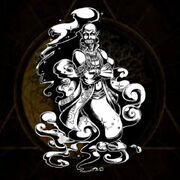 "We are old and many, fashioned of flames we are masters of many forms. We are a moody race, let us hope that you've caught me at the right time."

For the ancient Semites, Djinn were spirits of people who seemed to have vanished, only to act during the night and be gone by the first light of dawn.