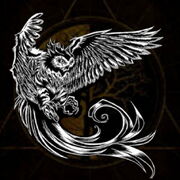 "I am the fierce eyed spirit of the night. I come as prince of owls, my cries cause mothers to hush their babes."

Cipelahq (pronounced "chee-buh-lock-w) serves as a boogeyman for the the Maliseet and the Passamaquoddy tribes in New Brunswick, Canada and Maine, U. S..

Its name probably come from the Maliseet-Passamaquoddy word for" scary eyes".