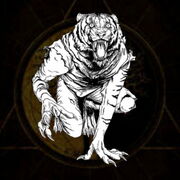 "I have the mind of man and the form of the tiger. While my history with man has been turbulent, I will occasionally serve a capable witch with a good cause."

According to the community of Kerinci, Jambi, Cindaku is an embodiment of human tiger.

Cindaku is often described as a human being who can transform into a half-human (maintaining his human mind) and half-tiger and he can only transform if he's in his birthplace with his chest comes into contact with the ground.