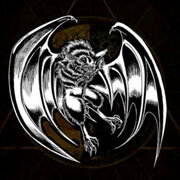 "I am the Snatch Bat, a black winged agent of death. The noble heroes of Maya were no match for me, what makes you think you'll have a chance?"

Camazotz ("death bat") was a bat god and was associated with night, death, and sacrifice.

It has been suggested that Camazotz is a sacred vampire.

There has been some connection with recent fossils of a giant bat.