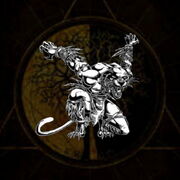 I prefer to keep to the shadowy fastness of the forests, turning my feet to trick my followers. While I have little concern for man, the right gift can earn my favor."

Spirit derives from the Tupi-Guarani mythology in Brazil.

Caipora means "inhabitant of the forest", and is one of the animal guardians in this region, often confused with Curupira.

Both the Caipora and Curupira are both very vigilant against poachers. One way the Caipora scares away prey and "hides" animal tracks, makes hunters lose their way in the jungle, disorients the hunters by simulating animal noises and by leaving fake tracks.