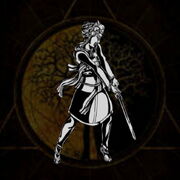 "I once rode as the lord of war spiriting the horde of Genghis Khan! I still serve as the guardian of Mongolia, but I'm always up for an adventure!"

Begste (pronounced "begs-ze") is a pre-Buddhist war god, known as dharmapala, which means he is a defender of Buddhism.

Like the caption states, Begste rode alongside Genghis Khan during his rule from 1206 until 1227 CE.